Big announcement: I'll be releasing my second record on September 2nd. It's been in the writing phase for a long time and the quarantine finally gave me some time to push it through to production. I wrote a Project proposal for this which I'll share below in redacted form. Stay tuned for tutorials, opinion pieces, and journal entries as I embark on this process. I'll do a separate post for each song in the album as well. Without further adieu:

‘Mutations’ will be my 2nd Extended Play record under the ‘IDDQD’ Moniker. Originally founded in 2011 in Istanbul as a collaborative improvisational project, the project has changed shape and style along with my life. These days it’s mostly where I publish solo non-film works or internet-based collaborations with musician friends around the world. Check out my Souncloud here!

The EP will showcase 5 tracks and clock in at just under 25 minutes, mostly material that I’ve composed in between my film gigs in the past year. The style could be loosely described as ‘Indie/Psychedelic’ but the musical style and instrumentation differs drastically from song to song.

In my first record ‘The Last Year on Earth’ (available on my Soundcloud), finding a solid concept proved to be extremely inspirational, and informed a lot of my decisions, from lyric-writing, to the artwork, and even mixing style. The story was set in the future where humans were forced to leave earth to find habitat in other planets, and the moral qualms the last few humans faced about spreading the disease of humanity beyond the planet we’ve destroyed.

With this record, I was struggling to find a concept, because the music itself is so diverse in style. In the past few years I’ve developed interest in many musical styles and lost the ability to nail down a single style, let alone a singular concept. Recently, it dawned on me that the diversity in styles can be a concept in and of itself! 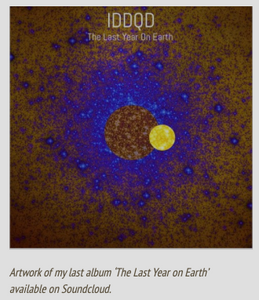 In this record I wanted to explore nature as a concept, and all that we do to destroy it, and all it has done to outlast us. I found it appropriate to take inspiration from how nature experiments with different lifeforms, and thus the concept of ‘Mutations’ was born. All songs are mutations of my musical taste, and each track has been named after an animal on the verge of extinction, mutations in DNA to put it in convoluted terms!