Converting two Mono items to Stereo, or One Stereo item to Mono, Destructively 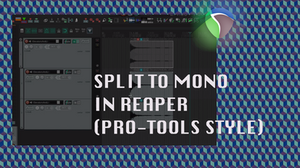 Update: The first episode is now somewhat obsolete, given the action 'Item properties: Set take channel mode to mono (downmix)'! The one upside of using my custom action is that it creates a mono file destructively, so it could make some extra space for you by letting you discard one channel's worth of data, if it's a consideration!

I'm excited to introduce my new series called 1-min Tutorials! I've been hard at work and have already released 3 episodes of this, with more coming every day!

In an eternal effort to becoming a YouTube Content creator, I've been trying a few different series to see which one sticks!

Nowadays that Facebook seems to be on its way out, I find a lot of joy in frequenting Audio groups and trying to help people out, until it finally dawned on me that that could be a way of getting subscribers by creating content literally for one person! Hopefully if I do enough of these and get one subscriber per video, I'd still end up hitting my goal of 1000 subscribers in about a year or so! Not great, but not bad either!

In the first episode I tackled the issue of splitting stereo tracks into mono, and in the second episode I did the opposite, turning two mono tracks into a stereo item. This is easy to do for any Pro Tools user, but in Reaper, since tracks don't have a pre-specified number of tracks, you need to employ a bunch of trickery!

In the next three episodes, I will tackle 'Cycle Actions' from the SWS Extensions.

While the series is called 1-min tips, my real goal is to keep every video under 2 minutes! I'm also trying to make the overall premise of the series as loose as possible, so while the first 5 episodes are all on Reaper, I want the series to be able to house anything from other DAWs, to overall sound design and recording techniques, and anything loosely audio-related.

If you have any questions that loosely relate to audio, let me know in the comments and I'll do a video on it ASAP.

One Year Anniversary Update: Reading what I wrote above I'm like LOL! How things have changed! We changed the name of the series, and the length naturally grew as I began tackling more complex topics. Overall, I'm happy with how far the series has come, and I have well exceeded my goal of having 1000 subscribers in one year, Currently sitting at 3245. It got me thinking about whether I should keep setting goals for myself on this blog here, and revisit every year to see how I've done!

So going slightly more ambitious than I probably should, I am aiming to hit 10k subscribers by the November 2022. Doing this, I would imagine I'd have to reach beyond REAPER, for which I have some plans, of doing plugin reviews and maybe even covering some music theory! Let's see how we do!