And the winner of the SOE Sound Design contest is....Me! 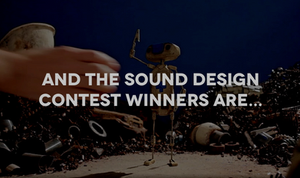 A while ago I submitted my entry to the SOE Sound Design contest, and today I was announced as one of the winners! A huge thanks to the folks at 'A Sound Effect' for organizing this great contest and all the stuff they do! My prizes were a few really high-quality libraries from Sounds of Essen which I can't wait to put to good use in future projects!

For this project we were limited to a small library of selected sounds for our sound palette, which introduced an interesting but not unfamiliar challenge to me, and ultimately dictated the direction I ended up going with it!

The way I imagine the story is as if the robot is aware of its existence and suffering, as it finds itself dismembered and discarded, only to find itself captive after putting itself back together.

Due to the nature of the sounds provided, I decided to go for a psychological horror-esque treatment, which is unusual but goes to show the power of sound design in defining the emotional tone of visual works!

I've always drawn inspiration from the likes of Ben Burt, who masterfully inject robots and other animated creatures with a lot of human emotions through sound and voice design. At the same time, I'm also inspired by the likes of David Lynch who use sound to convey fear and evoke a sense of discomfort in the audience. This was really my attempt at marrying those two realms!

While the video is extremely cute, the sound is really what drives the viewer's experience, and I believe while most robot sound design is seen in more...happy animations, I wanted to explore the realm of negative robotic emotions.

I hope you like this, and please let me know what you think! If my video hits 1000 views I'll do a few tutorials on how I did it!