I am happy to present my latest YouTube Series! Sound Design For Visual Media (Hereby SD4VM) is a new YouTube series covering the basics all the way to the advance of Sound Design & Scoring for Film, Television and other media!

Each video will be accompanied by a blog post containing notes, cheat sheets, extra study material, free downloadable content, and much more, designed to solidify your knowledge of the topics covered. You can watch the first two episodes here on YouTube!

Below are the notes for the first two episodes. Episode 00 is an overview and only required watching for those who are not familiar with how Film for sound works. Episode 01 covers the first steps towards optimizing your workflow for film work! 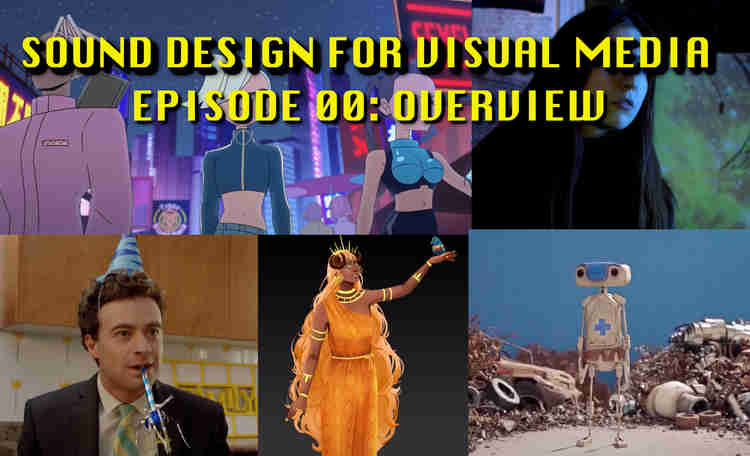 This episode provides an overview of the series, as well as a brief and condensed overview of the film audio pipeline: How various aspects of Audio in films & TV are organized. Watch the video! feel free to skip this video and go straight to episode 1 if you are already familiar with these terms: Foley, BGs, Specs, Sound Design, Production Audio, ADR, and Hard Effects. 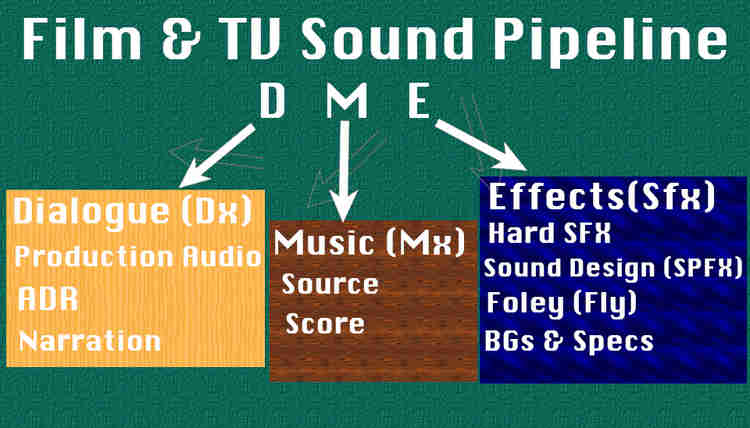 Can you tell I'm not a good graphics designer?

Broadly speaking, film sound is divided into three groups: Dialogue (Dx), Music (Mx), and Sound Effects (Sfx). This is why you will see film edit sessions labeled DME edit, Dx Edit, Mx Edit, and so on. 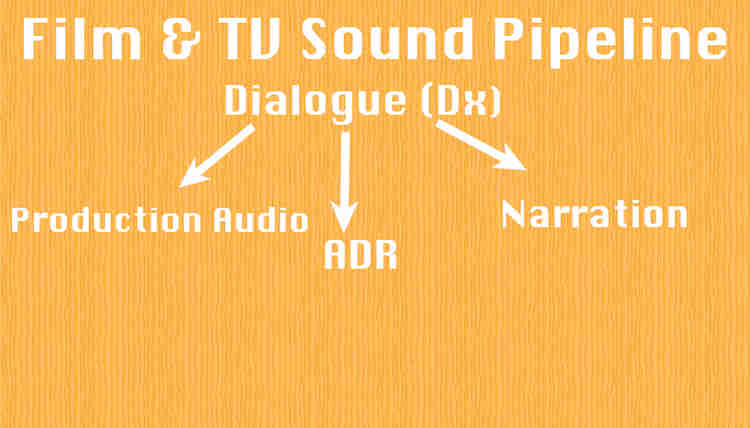 Production audio is sound captured on set by a 'Boom Operator' and mixed by a 'Production Sound Mixer'. This will include spoken dialogue as well as Production FX, non-verbal sounds captured on set. This is an accurate representation of the sound in any scene, but the quality is not always great. There are many obstacles to capturing perfect sound on set. Production audio is most commonly used as reference for the filmmakers, as a shooting day wraps up, someone on set is usually tasked with producing 'Dailies', footage from the shots taken on that day. This is used by the directors and producers, as well as editors. Video editors can use it to cut scenes together, while sound editors can use it to get an idea of the environment, the reverb characteristics of the room, the sound of objects around the room and so on. Dialogue editors will listen to this after the video editor cuts them together, and usually produce a list of all lines that are unusable due to extraneous sounds, microphones malfunctioning, or just being too quiet and noisy.

For more info on Production Audio, I highly recommend the YouTube Channel by my former teacher, RLFO Sound.

This list is then given to the producer, who books an ADR session. ADR or Automated Dialogue Replacement is a very common aspect of film dialogue. It's when actors are called into a studio to re-record the lines spoken in the film. %90 of what you hear in movies is ADR (sorry to burst that bubble for you!) and not only does this provide Dialogue editors with high-quality recording of the lines, but is also used in the event that lines are added or altered since the filming (which is very often!)

This video by Filmmaker IQ dives deep into the topic of ADR. Filmmaker IQ is overall a wonderful channel focusing on all aspects of films, with well-produced and well-researched videos on a multitude of topics!

Finally there is Narration or Voice-over. These are spoken lines that never occurred on set, and include narration, all dialogue in animation films and cartoons, as well as dialogue lines that are spoken in films through phones, speakers, and other electronic devices.

Music in film comes in two forms: Diegetic or Source music, and Non-Diegetic Music or Score. 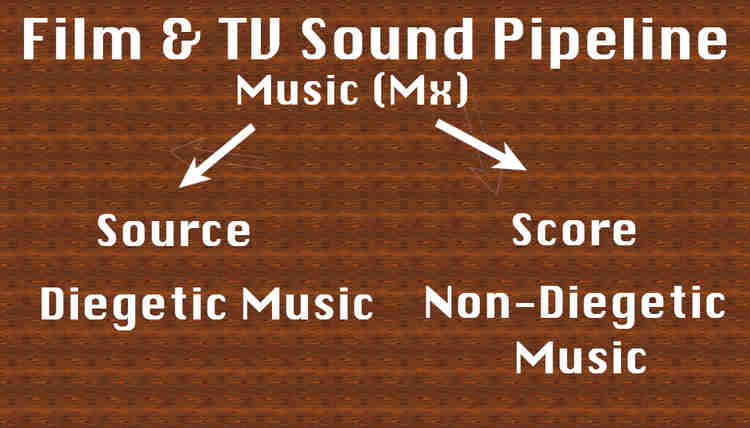 Source or Diegetic music occurs in the film's world. This is music coming from record players, car stereos, clubs & venues, or even music performed by actors on set (either by real musician actors or faked, often comically, by non-musician actors)

Non-Diegetic Music or Score is music that the audience hears but doesn't emanate from the film world. This is added for emotional impact and to advance the story-telling, or in period pieces as a signal to a historical era (or fictional future)

This video contains examples of both in famous films & TV shows.

Quick self-test: Think of the last movie, TV show or animation video you watched.
-Was the music Diegetic or Non-Diegetic?
-What role, if any, did the music play in advancing the story and adding emotional impact?
-Try to think of one example of Source and one example of score in your favourite movies.
-Comment your answer and share with the group!

Essentially every sound that isn't Dialogue or Music in movies, is a Sound Effect. These come in many forms, often with the lines between this subcategories blurred and intentionally breached! 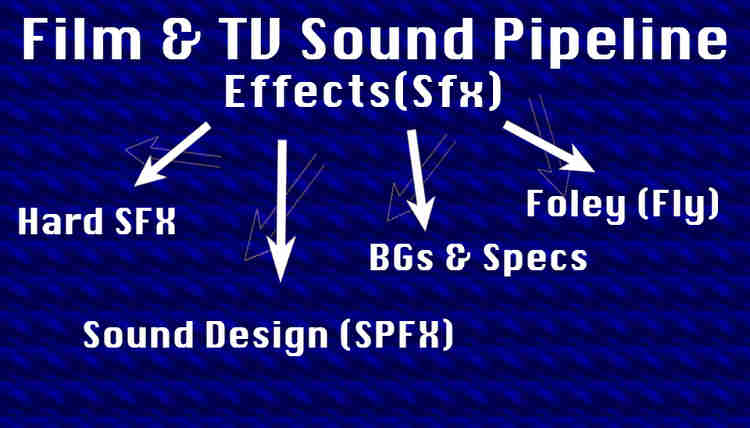 Hard Effects (Sfx) are sounds of objects and events in a movie, like doors closing, elevators dinging, car engines starting, car tyres screeching and so on. These are sometimes recorded by a sound team or taken out of sound libraries. The website 'a sound effect' or a program like Splice are among the most famous library hosts online. You can also find a lot of free sound libraries around the internet.

Special Sound Effects (SPFX) are designed Sound effects. These are sounds that don't have a real-life counterpart, like the growl of Godzilla, the roar of the Batmobile Engine or the sound of guns in Star Wars! These sounds are created using a mixture of base sounds from libraries, manipulating recordings, and Sound Design/DSP (Digital Signal Processing).

BGs, Bed Tracks, or Ambience Tracks are sounds that put the audience in the world of the film. This can be the sound of birds chirping and wind in a jungle scene, the sound of people talking in a crowded train station, or the sound of New York traffic.

A close cousin of BGs are specs, these are sound effects that don't happen on screen, nor would work as bed tracks, such as the occasional church bell dinging or a dog bark.

Finally there's Foley (Fly) which is an art in and of itself. Foley is the act of recreating the sound of movement on screen. This is usually performed in sync to picture by very capable Foley artists dedicated to their craft.

Once again, watch this video by Filmmaker IQ for a detailed history and overview of Foley. We will also revisit the topic of Foley, as well as all other compartments of the Film & TV sound Pipeline, in future videos. Make sure to stay subscribed!

Episode 01: Setting up a Film Project in Reaper 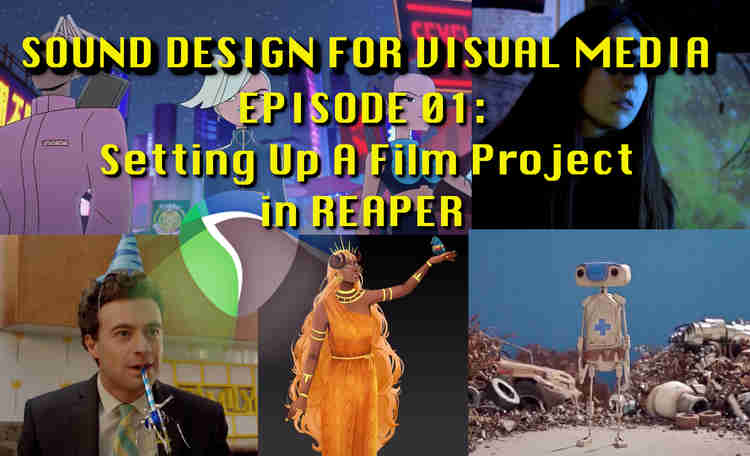 In the first episode, I describe my base template for film sound editing in Reaper, as well as provide a breakdown of my various Track groups. In the next episode's notes, I will also share my own Track and Project Templates. You can find all Reaper-related downloads in my page on the Reaper Stash, a free platform for Templates, Icons, Scripts, Themes and other files related to the Reaper DAW.

So that's it for now! Please comment me your suggestions for future videos, and subscribe to my YouTube channel for new episodes every Wednesday! I also do daily 1-min tutorial videos on the same channel, and many more!